Drupal conferences, generally speaking, are the best way of following Drupal development; they offer a far deeper perspective than what one might learn just by going online. Although I’ve been attending sessions on Drupal 8 at conferences for three years now, the 2017 Pacific Northwest Drupal Summit (2017 PNW) in Vancouver was the first time for me that it felt like we were talking about D8 as a mature product rather than an upcoming product. For me, this was a marked experience. Given that I’ve attended many sessions on various aspects of Drupal 8 for years, these sessions felt more technically advanced than at any other Drupal conference I’ve attended (D8 or otherwise, including previous PNW Summits). Casually sharing space at the bowling alley with Drupal heroes like webchick further underscored this feeling. I was grateful just to be there.

Not only is Vancouver my old stomping ground, one of 2017 PNW’s sponsors was Affinity Bridge, a company I once worked for, so the conference was a nice link for me between my recent past and present. It was great seeing old Affinity Bridge friends, and with the conference taking place very near to Affinity Bridge’s office, there was a surreal sense of continuity for me, a sense of my karmic place in the Drupal universe.

Given that Kanopi is a fully-distributed company, it was incredible, as always, to connect with Kanopians in real-life. I was feeling lower key than usual, but that didn’t stop me from having a great time simply hanging out with the crew. We talked work, and we talked non-work, striking a good balance, and deepening that sense that I am working with people that I will be working with for a long time. On the Friday, Kanopi introduced to our Slack chats the HeyTaco! plugin — a fun way to thank your co-workers by awarding them virtual tacos. THEN on the Saturday, we ate REAL tacos — literally the best I’ve ever had — at an amazing restaurant, Rogue Kitchen. It was a small, but very clear synchronicity which just seemed to tie up for me the sense that everything in my corner of the Drupal universe is going perfectly.

Some further insights from my colleague:

“Because we work at a distributed company, my favorite part of most camps is getting to connect with my coworkers in person, but the highlight of this one was watching one of my Kanopi teammates, Paul, totally rock his first ever presentation!” 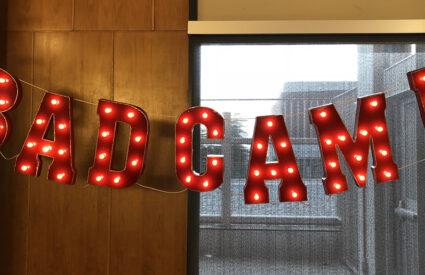