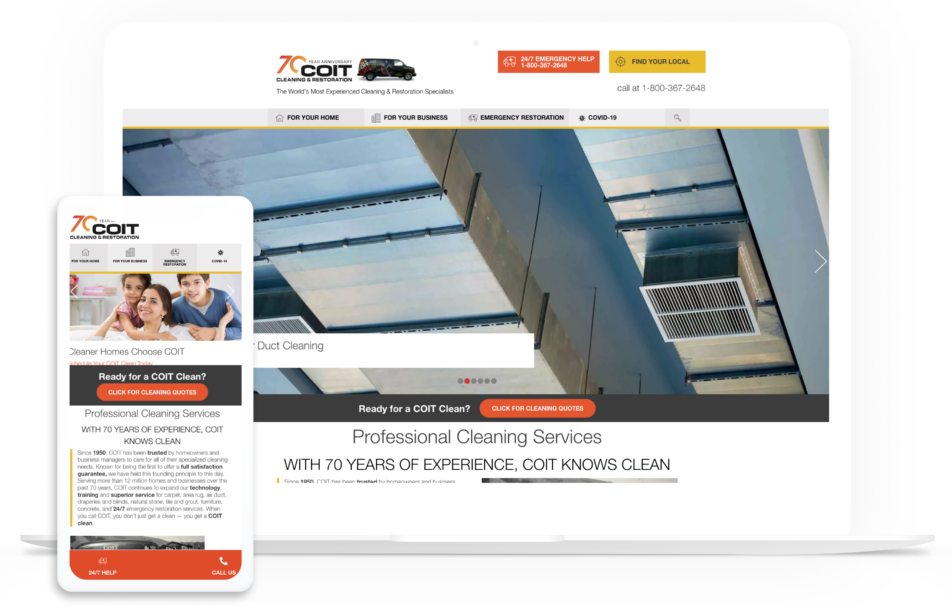 Time to clean up its own mess
It had been years since the COIT site had been updated, and it was no longer relevant from a user perspective. The navigation was not streamlined to services, the mobile experience wasn’t optimized for conversions, and users couldn’t easily take any actions. Plus their largest competitor had just completed an overhaul of their site. It was time to clean house.

Some key things were required for the new site; due to having multiple locations in two countries, geolocation was critical to maintain and improve. Additionally, each franchise offered promotions, and needed to maintain custom promotions tailored to each franchise location. Goals were set to allow three main conversions: for users to schedule services via an online form, get people to call the phone number for a specific franchisee, and to request a quote online. It was also critical to not disrupt the existing SEM: a driving business concern was ensuring that re-architecting the site to better meet Drupal best practices and to ease centralized content management didn’t result in franchises losing their hard-won visibility on search engines.

Because the site was a corporate site with 100+ microsites, Drupal 8 was the perfect choice to accommodate all the various requirements in addition to the needed complexity, all while allowing for a focus on visual design. 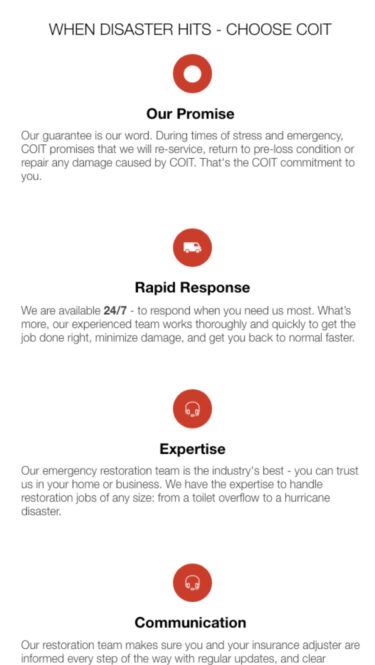 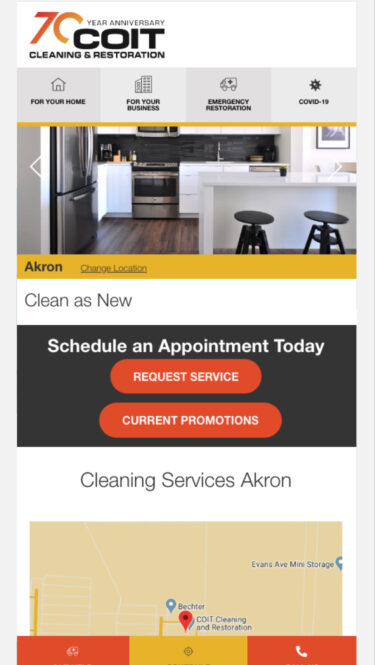 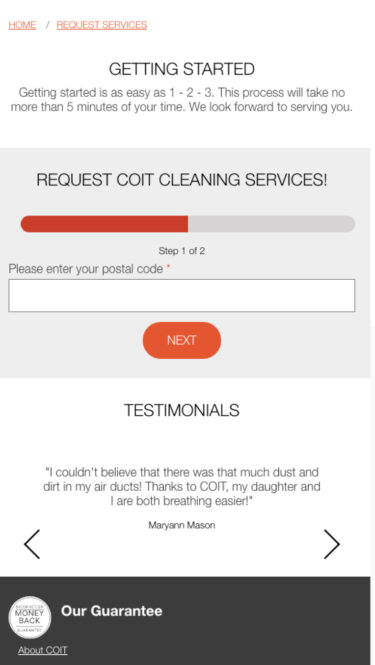 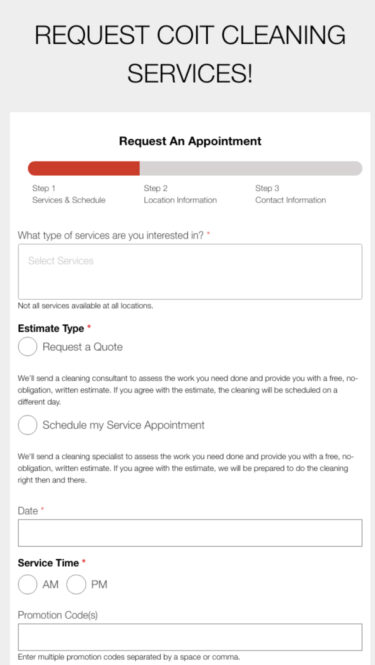 Building with atomic design principles, the pattern library for COIT provided detailed views of all elements within the design system to build upon each other. This ensures design consistency and allows for easier visual language scalability. 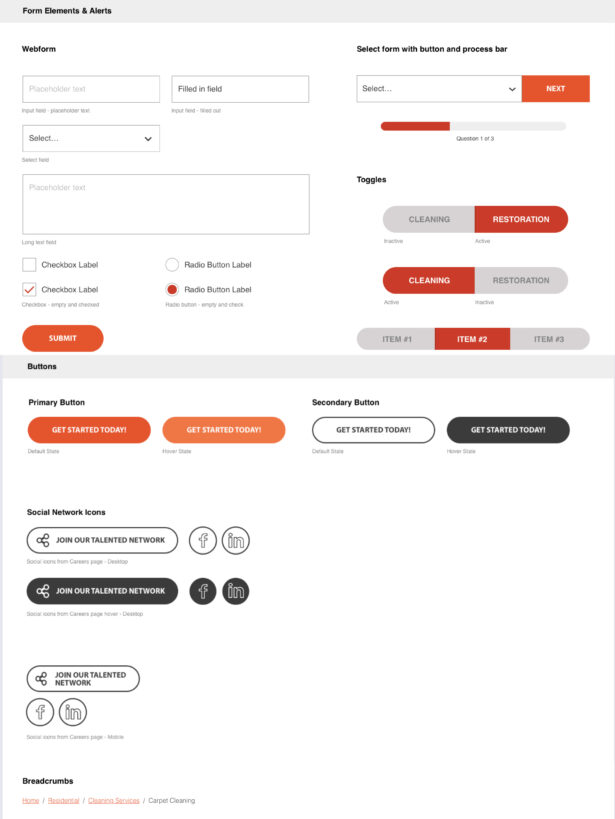 In combination with geolocation, over 100 franchises have their own localized experience. This allows for the franchise to choose their top services for promoting as well as features coupons and other localized information. 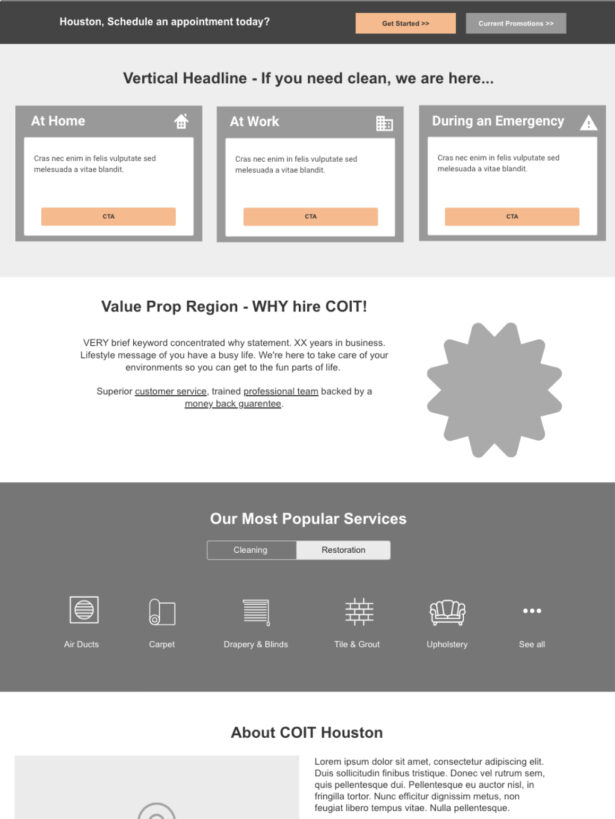 There were three main areas where the project made the greatest impact: geolocation, streamlining of forms, and making an easier content editing experience.

Geolocation was integrated so users from a certain zip code could be redirected to their closest franchise location. Kanopi was also able to not only maintain the existing franchise promotions model but also expand upon the features and management of the franchise promotions. By adding in Geolocation it allowed for us to solve an additional issue of users from Canada accessing the United States site.

On the previous site, there were two forms: a “schedule” form and “request quote” forms, with the former having daunting 30 fields. It was also confusing as to which form should be filled out as some only wanted quotes and others wanted service. Kanopi streamlined the process into by simply asking, “what do you want to do?” and turned the whole form into a simple 3-step process, then providing the correct form to the user. The geolocation also allowed COIT to drop users deeper into the form based on their location allowing them to see and take advantage of that franchise’s current promotions.

Lastly, the addition and editing of content was disjointed from an admin interface. Domain Access was implemented so COIT can easily add pages to either the US or the Canadian site. The creation and editing of pages can also be easily associated with a particular franchise. For example, not all services are offered by all franchisees; if a franchise does not offer drapery cleaning, content editors simply do not create that page. However, COIT’s corporate office doesn’t want to lose that lead looking for drapery cleaning. The solution was to have all services show up on each franchise location, but if a page is not created, the user is redirected to the corporate page so the lead is captured.

The CMS allows editors to surface important services on each franchise homepage and layout to promote the services that each franchise wants to highlight. Flexible layouts allowed COIT to add content at will and build pages the way that worked best for them.

Users from a certain zip code are redirected to their closest franchise location while also distinguishing between Canada and the United States for locations close to the border.

By simply asking, “what do you want to do?” the form became a simple 3-step process. Geolocation also allows users to see that franchise’s promotions.

Domain Access allows COIT to easily add pages to either the US or Canadian site. The creation and editing of pages is also easily associated with a particular franchise.

With a new and flexible site, COIT can serve existing customers and reach new ones with greater ease. The improved content strategy allows editors to add new lifestyle-focused blog content that can be properly surfaced while continuing to increase SEO. Deeper conversion tracking is being implemented on their multi-step form so COIT can understand where users drop off and continue to optimize the form process. The new COIT site allows for this constant iteration and improvement so editors can manage the site better, and their customers can enjoy a better experience. 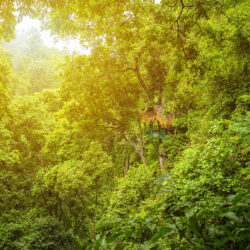 The best decision we ever made was to circumvent working through a digital agency and instead work directly with Kanopi. The Kanopi team are not just Drupal experts, but the staff has strong SEO experience and knowledge who can help create solid and reasonable business decisions. Plus the customer experience was amazing; in the past with other agencies, I never got past a Project Manager. At Kanopi I had a PM who not only managed expectations properly, but who also gave me access to the team directly via Slack and Teamwork. Adding me to the internal channels opened up the lines of communication, and was a level of customer service I’ve never found anywhere else.

If you’re looking for a company that is more than a vendor but a true partner, people that care about your business and you, then Kanopi is the team for you. 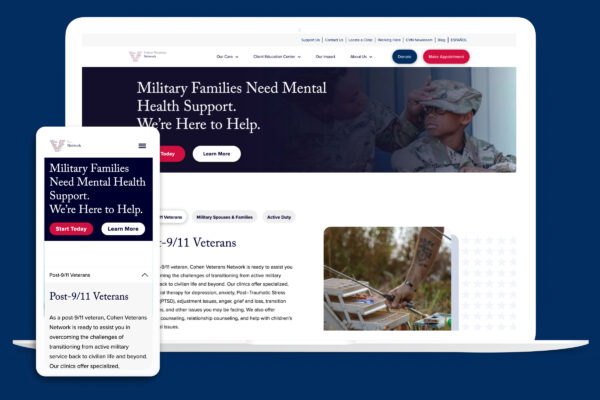 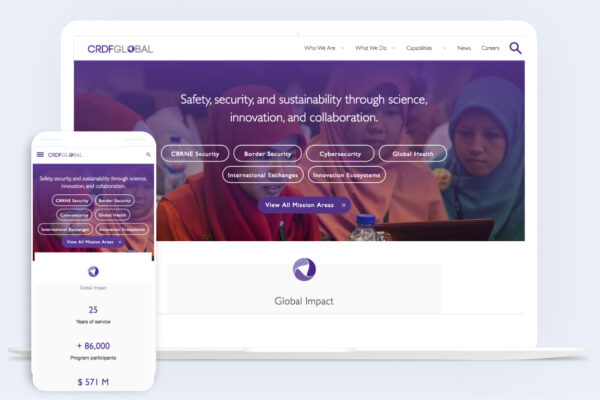